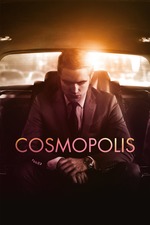 ''The more visionary the idea, the more people it leaves behind.''

Much like Dead Ringers, Cosmopolis is on the verge of being a masterpiece, but it just feels stretched across a runtime that its content can't fully justify.

Unlike Dead Ringers, rather than a single sequence that could be cut, basically every scene in cosmopolis is about 33% longer than it needs to be—especially the ending, which is ten minutes of conversation stretched out over 20 minutes of dialogue; most of said dialogue being tedious and hollow.

Still, Cosmopolis is a film i respect the hell out of.
While I think it detracted from the film's power overall, the decision to deny violent gratification to the viewer to show Packer's apathy was clever and interesting—only violent or taboo acts Packer was actively engaged in were shown, whereas the film would cut away from things that Packer had inflicted on him by others; he gets no thrill from anything anymore, no matter how extreme, unless it's inflicted on someone else, usually by himself; he no longer gets enjoyment from passivity, he has become something like an active voyeur.

I also liked the film's accelerationist angle, with hypercapitalism as an all-pervading neutral force of nature that causes its own opponents, but also inherently disproves them.
Within the film's context, the revolutionaries are angry, their grievances are potentially even valid in many ways, but they're also wrong.
The future is inevitable; the system doesn't collapse, it just engages in an infinitely sustaining process of creative-destruction.
Forever has no 'late-stage'.

It's just a shame that the film runs 2 hours instead of 90 minutes.

Cosmopolis has shades of Videodrome—with hyperspeed society (Its emptiness, technological detachment, and lust for violence) taking the place of hyperspeed media—but it's unfortunately less dense and much longer than that film, leading to a less tight package overall.

Still, while not one of Cronenberg's best, Cosmopolis is one of his most interesting—and it is still very good.