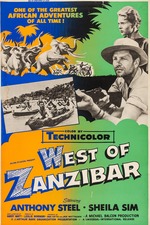 Director Harry Watt brings his reliable documentarian eye to this tale of ivory smuggling in East Africa. Anthony Steel plays a game warden who is set on the trail of the bad guys after a tribe he is close to get embroiled in the nastiness, with wife Sheila Sim doing a lot of wifely worrying that he'll be alright.

It is all a bit White Man Saviour, although to be fair to the picture, this issue is addressed pointedly in a few speeches. The natives all converse with each other in local languages and there are some nice observational sequences - it has a whiff of reality about it. The location shooting (most of the film) comes across well in Technicolor, just let down by a few poor back-projection shots. It's much less high-octane than the poster would suggest but an interesting glimpse at a world that no longer exists. Apart from the poaching and slaughter, alas.