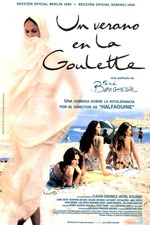 A film set in a sunny beach town on the coast of Tunisia... the year is 1967, just prior to the (Six Day) Arab-Israeli War, and involves three young women coming of age, from three families who happen to be Muslim, Jewish, and Christian. All take their religions seriously, but not too.

Two general themes run throughout: the poverty of the place -- they all live in a rundown apartment complex whose landlord is something of a lech; and a pervasive sexuality -- all of the teenagers, and some of the adults in the film seem obsessed with sex. The plot in fact is set in motion when the three girls make a vow (in a church no less) to lose their virginity before August 15th. This happens to be the feast of the Assumption of the Blessed Virgin Mary, but that's typical of the somewhat skewed humor of the film.

The film looks older than its release date (1996) but the family dynamics are all wrong for the time. The three fathers are all a bit buffoonish and the mothers long-suffering and tolerant (a post-modern conceit). On top of that, the girls all act as if they would be comfortable in a modern American mall. And would young women of this time really lie around napping semi-nude in view of their fathers and young brothers, even if it is summer?

In tone the film reminded me of Fellini's "Amarcord" though without that film's elegance and poetry. "L'été à la Goulette" wants to imply that there was a golden age when people of different ethnic backgrounds could live together in harmony and that's certainly a large part of the appeal the film. But then it implies that all this came to an end with the outbreak of war in the Middle East. I think where the director errs is in making that conflict a cause rather than a catalyst.

Many of the visuals are a delight, and a cameo by La Goulette native Claudia Cardinale is a bonus.