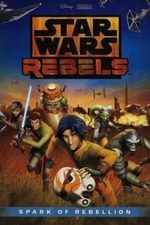 After rewatching Star Wars: Rebels, I gotta say my opinion has changed a lot. It's still inconsequential most of the time, but when it hits you, it hits pretty hard. It's still the most repetitive piece of Star Wars media, but it somehow manages to entertain you even in some of the worst episodes. Not all of the main crew is well-developed, but their family relationship is a delightful addition to the usual Star Wars team dynamic.

It's certainly a very mixed show, but it is still solid. Compared to The Clone Wars, it has a lot less highs, but I wouldn't say the lows are that low. Season 1 is very charming, but suffers from the show's core problems the most. Season 2 is better, but still not quite up there. Season 3 is basically the show in a nutshell; incredible ideas, but a lot of wasted potential (but it significantly is better than the second one). Season 4 really grew on me this time, it is the most consistent in directing and storytelling.

Rebels is a flawed series, but still very passionate and enjoyable. Wouldn't recommend to anyone, but I think Star Wars fans should give it a try.