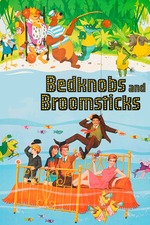 There are three movies that I feel make up a "holy trinity" of Disney Live-Action: Mary Poppins, Pete's Dragon, and Bedknobs and Broomsticks. There are many fine films, and many really great ones from the studio, but these three are the tip of the pyramid, as it were.

Set in WWII England, Miss. Price inherits three orphans evacuated from the bombing of London. The kids discover she is an apprentice witch, taking correspondence classes from one Professor Emilius Brown. They embark on a quest to find a powerful spell that may turn the tide of the war.

A simply wonderful, magical film that sparked my imagination as a kid, and never fails to enthrall me all over again. The music, the characters, the songs, all come together to form this perfect little film, anchored by Disney go-to David Tomlinson, and the incomparable Angela Lansbury. Their onscreen charisma is matched only by the level of hijinks as the film progresses.

You'd think a film that deals with WWII, and unexploded bombs, and criminals willing to cut kids with switchblades would be a little bit darker than your normal Disney fare, and in some ways, it is. But Lansbury's Miss Price simply can't be bothered with it. She's not phased by anything they come up against so great is her focus on her mission, and so we too, are not worried by those dark moments.

This may have been my first exposure to Nazis, and it's somewhat appropriate then that (being a Disney film) they're portrayed as dangerous, yet a little inept and easily defeated, since that's what all Nazis are.

The dark moments are counterbalanced nicely with the magic. Flying on broomsticks, turning people into fluffy white rabbits, and the entire Isle of Namboomboo sequence, which features an animated soccer match are childhood delights. It's all capped off with an incredible army of marching suits of armor that move about on their own, terrorize the Nazis, and (like Miss Price) simply can't be bothered with the bad guy bullets.

We wind up watching this one at least once a year (usually as part of our kid-friendly run-up to Halloween) and I don't see that EVER changing. I refuse to hit the age of not believing.

The Arrival of a Train at La Ciotat