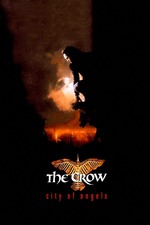 The Crow: City of Angels

One of those cheap and terrible sequels that tried to cash in on the popularity of the original (and failed miserably) and then commits the unforgivable sin of undoing the outcome of the first. (It can be argued that Brandon could rest not because he avenged his wife's death, but because he saved Sarah and her mother from the hellish existence they were trapped in.) But this film manages to undo that "happy" ending, and leaves us scratching our heads going, "then what was the point?"

And if that's not enough, the director decided to be "stylish" by coloring the entire movie with a yellow hue (either that or he actually shot the whole thing with yellow gel's over the camera lens), which results in taking these cynical, ugly, unattractive people and make them sickly looking to boot.