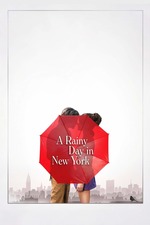 Like a lot of Allen's later films this one is annoyingly charming. Or charmingly annoying. Maybe a bit of both.

Somehow either his writing is off nowadays or this younger generation seems unable to deliver it in the right way. He especially struggles to find a contemporary vessel for his own persona in these characters that he himself outgrew in his age.

Be it Jason Biggs, Jesse Eisenberg or here Timothée Chalamet and to some extent even Owen Wilson in Midnight in Paris (where it sort of worked) – they all feel not right for the part or as insufficient stand-ins for Allen. It works a bit better with his actresses, here Elle Fanning is quite pleasing as the ditzy blonde who smites a group of narcissistic New York artists (in their own way also stand-ins for Allen).

So Long, My Son