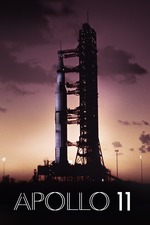 One of the (many) dilemmas of Marvel movies specifically and Disney in general is their (growing) interchangeability due to their repetitive images, themes and narrative. You watch one movie and you feel like you've seen it before since it treads known paths. After a certain number of movies they all feel the same.

This is not exclusive to Marvel/Disney but also documentaries. For instance: on a yearly basis it feels like we get 2-3 mountain climbing documentaries. The Summit, Meru, K2: Siren of the Himalayas, etc and last year Free Solo and The Dawn Wall, before that fictional films like Everest – who would be able to distinguish one scene from one of these with the other?

Besides mountain climbing documentaries there is also a vast pool of films about the Moon missions from NASA. For All Mankind, In the Shadow of the Moon, The Last Man on the Moon, also Apollo 13 and First Man. As a result of this – and due to historic knowlegde – nothing in Apollo 11 feels really that exciting from a narrative point of view. The story is known and we get no new layers, a lot of the visuals you will have seen similar in the above mentioned films.

If it wasn't for the 50th anniversary of the Apollo 11 mission this documentary would probably not even exist. It is by no means terribly made (although there are issues) but one can't help to wonder what it point is. If you know nothing about the space program and the Moon landing in 1969 then this documentary will really fascinate you, no doubt about it. If you do know about all this, then you will watch something that tells you what already knew. Which is fine but not very worthwhile.

I appreciate telling that story from launch to landing through archive footage. Some of the footage is so magnificently restored that it shines in 4K as if it were reenactments (other parts due to their source material don't fare that well, but that's not an issue). Miller tries to imbue some dynamic into his images, mostly by presenting them via split screen. Compared to similar archival documentary approaches like Asif Kapadia's brilliant Senna and Amy (which, in all fairness, focus on characters rather than an event) the split screen is a nice technique but doesn't really push the narrative in the way that's desired.

Miller's attempt to create some tension later on once the Eagle is looking for a landing spot even breaks the illusion. He dials up the score so the audience knows "shit's about to go down" when simply delivering Armstrong's and Aldrin's communication would've been sufficient or even more efficient and also more authentic. Even worse, the score gets dialed up so loud you hardly understand the audio.

Besides that Apollo 11 delivers nice glimpses in the relevance of the mission for society. From the news anchor's claim that the mission is "on behalf of all mankind" to the people camping outside of Cape Kennedy to watch the launch live or Nixon's anecdote that "the Heaven's have become a part of man's world".

Having stated above that we don't really get new insights I do concede that I did not know about the leaking hydrogen valve less then 3 hours from the launch. Very strange that they tried to fix it immediately instead of delaying the launch for a full analysis, considering what happened to Apollo 1. Or maybe Miller makes a bigger deal out of it than it actually was (the leak does not appear on the Wikipedia page).

So overall Apollo 11 is for the most part a well crafted encapsulation of the Moon landing with some beautifully restored archive footage but ultimately if you've seen other documentaries about the Apollo missions it offers nothing new or that interesting.