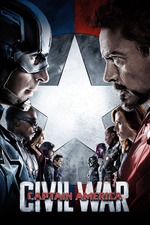 Well, this was a bloated movie if there ever was one. Nearly two and a half hours of images with hardly any plot connecting them at all. Sort of strung together by another one of those ludicrous one-dimensional Marvel villains they feature in all their films (this movie literally bumps up some B level "villains" motive from Age of Ultron to A level status).

One month after Batman V Superman we have to watch another round of superhero friends beating the shit out of each other centered around a billionaire with mommy issues. Alas, most of the sidekick heroes (this basically is The Avengers 3 rather than Captain America 3) feel shoe-horned in. Is Spider-Man fun? Sure. Does this film need him? No. But I do want an Aunt May prequel spin-off now – without Peter in it...(or I could just rewatch The Wrestler).

Speaking of Spider-Man, the same could be said about basically all of them. Does Ant-Man have to show up? What is his agenda? Why is Hawkeye (aka Arrow Guy) returning? And why is he fighting on Team Cap specifically? Are Scarlet Witch and Spider-Man supposed to be around the same age (someone mentions high school)? Because she looks way closer to Aunt May than Peter. Black Panther's presence felt most justified of all of those Avengers heroes. Even though he's kind of a clean slate with nothing much to him (yet).

I did "love" the retconning here that civilians actually do die in those Avengers movies (which was never really addressed outside of Netflix' Daredevil). One picture of one dead kid makes Iron Man turn the table on the whole Avengers MO (I, too, appreciate the fact that it was a dead American kid. 'Cos fuck foreigners). So begins a little forced feud between Steve Rogers and Tony Stark (who seemingly for some reason has Pepper issues again). Why this deserves to be called "Civil War" is beyond me, especially since the last Captain America title "The Winter Soldier" would have fit the bill way better. Since the whole beef is all about the Winter Soldier.

Whereas the most scenes that don't feature Spider-Man or Paul Rudd come of as slightly boring (Cooking with Wanda & Vision) the action scenes seemed kind of bland – with the airport fight sequence as the single exception. At least in the beginning. But this scene like the whole movie is in the end about nothing and at the same time just runs too long. This film looks pretty bland, too. As a matter of fact, it made my appreciate Batman V Superman more. Not only visually but also narratively.

In the end Civil War is rather disappointing. Especially considering it is from the Russo brothers who made the (for the most part) solid Marvel catalogue entry The Winter Soldier. Maybe that was just a fluke though. Because Captain America: Civil War is so meh it could've been a Joss Whedon film.