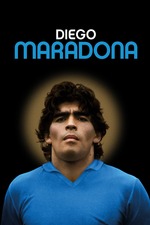 So far Kapadia's weakest archival biopic due to a lack of emotional impact and characteristic insight. Which is kind of ironic considering Maradona contrary to Senna and Winehouse is still alive.

Focusing on Maradona's career high from ´86 to ´90 with SSC Napoli the documentary picks up various themes and elements but seems unsure (or unable) to really go anywhere with it.

The Camorra aspect is introduced then seemingly forgotten only to come back at the end without any clear relevance. What was the importance of this connection to Maradona, how did it affect anything? The same could be said for his affair(s) coming at the height of his career with the championship in the Seria A and the World Cup win in Mexico. What went through Diego's head at that time, what later on, when he wanted to move to the next franchise but wasn't let go, only to lead his team to a second championship? How did he grapple with the fact he was the sole contributor to his family since he's 15?

Senna and Amy seemed to be different kind of beasts, melancholic and fascinated by their subjects. Diego Maradona is entertaining, sure, but it never really reaches the same heights as Kapadia's prior works.