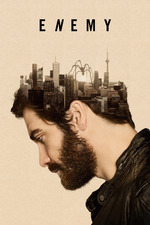 In folklore a doppelgänger is considered a sign of despair even an omen of death for the person who sees him/her. An intriguing concept, hardly used in film and television.

Here Villeneuve adapts a novel from José Saramago in which a history teacher accidentally runs into his doppelgänger. Fascinated by him he gets lost in researching his other self which leads to a meeting of both men. One that will change both of their lives forever.

Both men are played by Gyllenhaal, who went on to do Prisoners with Villeneuve too, which ironically was released prior to Enemy. The later focuses on his history professor who teaches his classes like he lives his life: without any panache. It takes a while to realize that Mélanie Laurent is actually his girlfriend and not just some hooker. That's how informal their relationship is. Any form of interest is only developed once Gyllenhaal's lecturer encounters his doppelgänger. He, a second-rate actor, at first believes him to be solely a stalker.

The inevitable meeting of both men leads to a change in motivation which starts another chain of events. And yet the mystery of the doppelgängers is not of interest to the characters. Are they twins, separated at birth? Clones maybe? The actor could consider the lecturer to be actually a stalker, so crazy, he surgically changed his appearance. Or maybe they simply are freaks of nature. Neither the movie nor the novel go into detail here.

More so the film delves into dream sequences revolving around a tarantula motif. A lot of room for interpretation and/or speculation, while Gyllenhaal's lecturer starts to lose himself more and more. As a consequence, Enemy invites its audience to revisit the film over and over, trying to figure out what everything means and how it is connected.

This is the appeal of Villeneuve's film which clearly isn't for everyone. Especially not for those viewers who demand an answer to everything (or anything, for that matter). Gyllenhaal excels at playing essentially the same guy and yet two different personalities. The color palette has a big appeal as does Toronto as the story's location. Enemy proofs itself to be a strong adaptation. Obviously it ain't a good sign to see your doppelgänger.