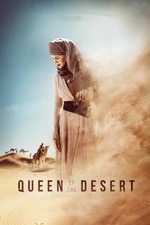 Queen of the Desert

If you hear the names Werner Herzog, James Franco, Nicole Kidman and Robert Pattinson you'd might expect some different kind of movie that you'll end up getting with Queen of the Desert. There is no room for craziness here. No Herzog shenanigans. As a matter of fact this is – cinematically – a rather romantic movie. Old school.

I don't know much about Gertrude Bell but what I read does not seem to be appropriately embodied in this film in terms of historio-biographical accurateness. Probably for dramatic reasons within the narrative. Herzog directs a somewhat beautiful film about a strong woman who helped shaped worlds to fill her heart after losing the men she loves.

Unfortunately even after over two hours I don't really know her motivations. She wanders the deserts, from one sheik to the other, exchanging polite small talk and presents. What does she make of the Beduins? I have no idea. In her last scene one of them asks her the same question and her answer is sweet but not very informative.

Maybe Gertrude Bell deserves an HBO mini-series more than a two hour film but as such the result is still alright. I wouldn't wanna miss R-Pattz as a comic relief T.E. Lawrence anyway.