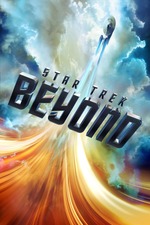 One thing is for certain: Simon Pegg believes Scotty is mostly defined by the (over)use of the word "lassie"...

One of the major problems of these reboot sequels is that the cast is trying so hard to echo their predecessor's performance they turn it into a caricature (e.g. Scotty, McCoy, Spock). Maybe due to his unexpected and sad early demise Anton Yelchin stole the show for me, delivering a sweet and very earnest yet nerdy portrayal of Chekov.

Luckily Star Trek Beyond features less action than the trailer threatened. What of it exists is sometimes hard to follow and kind of a mess but there is a fun visual and auditive space battle somewhere along the line which kind of makes up for it.

Narratively there is not much to this 13th adventure besides characters ponding questions of duty to the Federation and their personal motivation. Idris Elba shows up as the bland villain of the week, resulting in one of those boring and uneventful climaxes but generally he and his mates give the Enterprise crew as hard of a time as they can. Which is probably all one can ask for nowadays with these blockbuster action vehicles.

Overall these new movies do remind me more of the TNG films rather than the TOS ones though. But I do like that colorful poster.