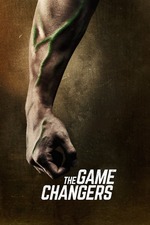 Going into this I assumed Psihoyos would cover a bunch of extreme athletes, most likely bodybuilders. Which, to be fair, in a way he does but actually the documentary turned out to be about veganism. Which is fine by me as a vegetarian myself although a sursprise nonetheless.

One of the major angles this film picks up is one at least I but probably most likely everyone has come across once in their life: the belief that to get strong and succeed athletically you have to divulge in animal protein. Like every time The Rock or some other action star prepares for a movie they will talk about their all-day-long chicken breast diet.

Psihoyos counters this with a variety of star athletes that actually gain durability, strength and recovery time due to plant-based diets. Carl Lewis for example, unbeknownst to me. Be it an ultramarathon runner, weightlifter or racing cyclist, they all base their nutrition on a vegan lifestyle. Since animal protein/products, as the documentary argues, are not really healthy at all for humans and their digestive system.

The points the film makes and the information it discloses are rather interesting. That being said it is quite partial and focuses mostly on the vegan side of things. Plant-based diets are swell for star athletes like NFL stars with big salaries but one topic the movie doesn't really dive into is how that would be appliable for gen pop. The movie brings the issue to a group of firefighters who reduce their cholesterol after being on a vegan diet but the real issue is that most Americans simply can't afford a vegan lifestyle.

Robert Kenner drew on this ten years ago in Food Inc. where an average family of four struggled financially and visited a fast food restaurant since their burgers were more affordable to them as the broccoli from the grocery. It's a catch-22 of course: your arteries are blocked due to animal products so you need medicine which lowers your spendings which prevents you from buying more expensive vegan alternatives which leads to fast food which blocks your arteries.

The same thing goes for raising a child plant-based which probably warrants additional care from the parents to make sure the kid gets all the nutrients it needs instead of going to milk, eggs and meat. Psihoyos interviews one bodybuilder who claims he has never eaten animal products in his life yet we don't really learn how his diet was organized for him to pave his way for building muscles.

Maybe these points would be a little bit more relevant than the (admittedly) amusing sidestory about how bean burritos give you stronger and longer erections than regular burritos. The Game Changers might not actually change the game itself but maybe the mind of one or other viewer who didn't believe that in order to be strong and fast you have to gorge that chicken, turkey and steak all day long.