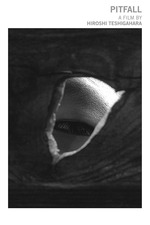 An aggressively bleak and harrowing film, with its barely contained energy and almost gleeful obliteration of hope and reason, Pitfall brings people's venom, greed, uncertainty and despair to light in an uncompromising way. It is so relentless in its depiction of a decaying society that it seems to take pleasure in terrorizing and breaking its characters. All major characters die and that's not all; some of them are brought back from the dead as ghosts to further their anguish and to make them witness the apparent pointlessness of it all. Near the end, the child discovers the body of his dead father as the camera intently focuses on a pack of dogs on the hill. The last shot sees the crying child running out of the still, dead town towards an uncertain future; if the tone of the film is anything to go by, he could very well end up eaten by those dogs.

Just like ants being placed into a bowl of water or a frog being torn apart, the film's characters are at the mercy of an unseen, superior, mocking and for all we know, inexistent force. The harsh reality of poverty, famine and exploitation is shown with each opportunity, to the point it risks becoming too abrasive if not for its sheer commitment to a vision and indication of the root causes. Between the occasionally jittery (yet mostly masterful) camera work, the unnerving and haunting score, the surreal atmosphere and suffocating heat, this is a film brimming over with frustration. It truly feels like an angry, rebellious film made by angry and rebellious film-makers, which doesn't seem far off from the truth, considering the political and social landscape of the time.

By the end two things seem to be clear: that we all end up in the same place, whether that place has been marked or not - or whether it has been predetermined or not (the white markings indicating the silhouette of a corpse); and that we can end up in that place in many ways, either by our own hands or by the hands of a man in a white suit driving a scooter.