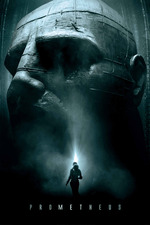 "Sometimes, to create one must first destroy."

Why do we watch movies? Some would say it's just a way to pass the time. Others would say they watch movies for their entertainment values, the spectacle and escapism they provide. Others would say a good story is the reason. Others would say it's because of the artistry and craftsmanship that goes into putting together a movie, the process through which a movie is created, the work and effort required to bring all individual elements together and make them function as one, complete and flowing piece of work. Others would say it's because of the themes and messages movies can transmit, the existential questions movies dare to ask or the contrast with reality they provide, acting as a reminder to aspects people tend to overlook and forget. Others would say it's because movies make them feel alive, movies allow them to experience different kinds of emotions and open their eyes to the world around them. To me, Prometheus is as complete of an answer to the question above as any other movie. Of course, there are some who watch movies only to unfairly tear them apart, Prometheus being a victim of these people whose voice unfortunately was loud enough to negatively influence others and taint the movie's reputation.

But I digress, I'm tired of defending Prometheus. What I am not tired of is praising it and no amount of praise I might give it will prove to be sufficient. Prometheus is brilliant. It uses the cinematic medium and language to its full potential to deliver a one of a kind experience, visually, thematically and emotionally; it is what every big-budget, sci-fi epic should strive to be. The length of thematic ground Prometheus manages to cover is staggering: the origin and nature of humankind, faith vs. science, evolution, the cycle of life and death, creation (natural and artificial), destruction, technology with its pros and cons. Just by placing the movie during Christmas (tying everything to the birth of Jesus Christ and religion in general) and calling it Prometheus (defiance of a superior entity/belief and questioning whether it's wrong or right to search for an answer and to strive for something not meant to be achieved) it opens doors to various interpretations. Questions regarding the provenance of humans, our place in the universe, our impact on the course of evolution, mortality as a curse or a blessing, all is carefully explored with a knowing touch of restraint from screenwriters Jon Spaihts and Damon Lindelof. David the android (magnificently played by Michael Fassbender), is an ambiguous and interesting character and what he stands for is even more interesting. A common thing with androids in movies is that they're portrayed as metallic versions of Pinocchio, they want to become humans. Not David. He almost despises humans and finds them vastly inferior to him. He'd be better off without them yet he is programmed to follow them, at least at those times when instructions can't be interpreted. He can be a very useful tool but an even more dangerous weapon of destruction when not monitored closely. He represents the evolution of technology with all its benefits but also the next logical step in the evolutionary ladder and, ultimately, humanity's downfall. Give mankind the power to create (fire, knowledge, life) and watch it destroy instead (war, artificiality, David).

That's merely the tip of the iceberg as far as themes and interpretations go. And Prometheus is also breathtaking to look at, displaying a visual mastery to match its metaphorical scope. Everything from production design, art direction, cinematography and visual effects is first-rate, it sports an elegant, unique and arresting visual language that becomes an integral part of the experience. And what would this experience be without its emotional journey? It begins as an exciting, hopeful and passionate search for answers, it explores the sincere sense of wonder that follows an intriguing discovery, it touches on surprise but also disappointment, greed and recklessness, it soon turns into something bigger and uncontrollable and becomes a terrifying struggle for survival that reaffirms the flaws and strengths of humans. The movie proposes a dark notion, attempting to exceed our limitations beyond our understanding (or better said, beyond the natural progression of things) could only lead to disaster, as we would never be satisfied. Yet it's in our nature to strive towards a greater purpose, for better or worse, we need to know that everything is there for a reason and so, we keep searching.

Ambitious, profound and relentless, Prometheus is a colossal achievement.