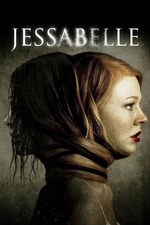 Sarah Snook has a fine performance in a film that unfortunately figures unnecessary racism is the best kind of twist a horror film needs. Whether intentional or not, the final message of the film is that black sexuality will ruin white lives... yep, it's the 19th century all over again.

The title becomes a play on words - Jezebel becomes Jessabelle - when what starts as a fairly predictable (but spooky) haunted house chiller dives head first into Haitian voodoo shenanigans replete with pulsating and crazed black bodies spilling blood around a campfire.

It's a tough one to recommend. The horror cliches get a bit grating, and the "twist" almost amounted to an interesting statement about racial tension in southern U.S. states except the film lacks the subtlety to pull it off without becoming pure exploitation.