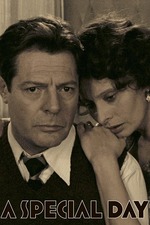 "if anything, fascism is anti-me"

The camera glides smoothly and slowly over these apartments which sets the stage for the entire film. Taking place shortly before WW2 with the alliance of both Germany and Italy the combined military forces and its figures are idolized. A soon to be total war with all efforts, resources, and materials drained for the cause. The colors are dimmed and only the flags are brought forth and have attention drawn towards them. The radio broadcasts it's momentous news all throughout the film which cannot seem to be escaped from.

Antonietta is a house wife who lives out her monotonous life always picking up and cleaning after her family. Her husband is unfaithful but she must continue her duty in the household and finish the chores. While Antonietta is alone one day a bird flies across the apartments to Gabrieles. A window directly opposite of hers almost functioning as opposing viewpoints. Gabriele would shortly bring forth new emotions and reasoning within Antonietta. A life and opinions she is not used to but becomes more welcome towards. He is an outcast for being a homosexual. He isn't a real man and is looked down upon by others. When confirming his homosexuality with Antonietta after a friendship occurs this stirs change within her. Her first genuine smiles and laughter shared. She has become so accustom to this life she had before that she blamed herself for any urges to change. This isn't what she was led to believe but it's a life that can promise to be more fulfilling. Can she really take a step to change the situation she has already been placed into? She too could become an outcast and unwanted. It's in the final moments of the film that we see Antoinetta embody this sense of loneliness as she stares outside her window with nobody else visible in the frame grasping onto the item her friend gave to her hours earlier. Putting this book back into a safe spot, turning off all the lights and retreating to bed.

With the setting giving off the appearance of a story small in scope, it quickly unravels into a tale of shared loneliness and becomes a much grander and poetic experience.