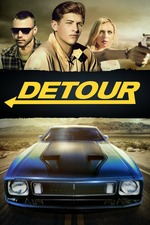 You know I'm going to expedite the viewing of a new release from the writer/director of the vastly underrated time-loop horror gem TRIANGLE.

I love the look of this film. The high contrast and deeply saturated color palette are wondrous and comforting like a hug from an old friend. Get your orange and teal shit and fuck right the hell off, every other movie. This is how a film is supposed to look. So, too, was I appreciative of the inspired and unpredictable camerawork. The editing, as well, made tremendous and proper use of split screen to tell the story - not something many movies do well.

Storywise, Detour doesn't try to reinvent the neo-noir wheel, but it does what it does in a compelling way that makes the film immensely watchable from start to finish. All three leads brought their A-game, though I was particularly impressed with the actor who played Homer on The OA. It took about 45 minutes for me to realize it was that same guy.

I can't wait to revisit this story after knowing how it all plays out in the end.