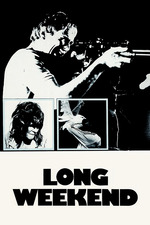 I was looking forward to this movie for a while now and I had it ruined by Jim Caviezel. Let me explain:

In my "Chlorine" review, I spoke about Eric and I catching these seemly straight to video movies our local CBS channel shows in the middle of the night (Saturday night/Sunday morning). They are usually really bad but actually have famous actors in them. About a year ago we watched a movie with Caviezel (I really dislike him, by the way) and another woman. They were driving around trying to find some beach. All sorts of weird shit was going on with animals, etc. It was odd, especially the manatee thing. Eric and I would reference this movie from time to time.

Cut to us putting on Long Weekend. As the titles start, one of us said "This looks kinda like that Caviezel thing." Yes, this is how we reference that movie. About 5 minutes later, Eric said "If there is a fucking manatee on a beach I'm going to shit my pants." About 10 minutes later I said "What the fuck?! This is exactly like that Caviezel thing. I'm going to look it up." Yes, of course, you guessed it. That fucking Caviezel movie "Nature's Grave" (a HORRIBLE title, no wonder it was straight to video) was a remake of "Long Weekend".

So, the movie I was really looking forward to watching was something I'd basically already seen without knowing it. Grrrrrr. "Long Weekend" was better than the remake. It certainly felt more sinister. Something about Australian films that don't take place in big cities always creeps me out. I can't put my finger on it. I do know one thing, going anywhere alone or in a small group outside of a big metropolis in Australia is a bad idea. You will die, for sure.

Oh, and if I see a manatee on a beach in real life, I will shit my pants.