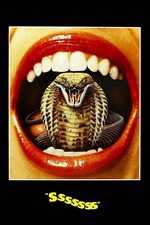 I know I just watched this within recent memory, but when Barry P. (@Barry_Cinematic) asked me to watch and write about something for his Nature's Fury Blogathon, I couldn't resist. If you don't already follow him on Twitter, get on it. He's good people.

Now, technically, Sssssss isn't a 'animals gone wild' kind of movie. Yes, the snakes in the movie do kill but they haven't gone crazy, they're just doing their job. It was man who went wild; Strother Martin to be specific.

How great is Strother Martin? He's a national treasure in my book. If I see his name anywhere in the credits, I know I'll, at least, enjoy his performance. He does not disappoint here as Dr. Stoner (I know!). He and his daughter (Heather Menzies, who has two speeds 1mph and 100mph, no in-between) run a snake research facility. In the beginning, she doesn't realize her pop is a loon who is doing experiments on his lab assistants. Dr. Stoner goes to the local college to get yet another asssistant and finds Dirk Benedict, of all people. Dr. Stoner starts "innoculating" him with snake venom, telling him it will protect him from snake bites. Over the course of the movie, Benedict gets many injections. Fast forward a couple of months and well, you'll just have to watch it.

Other notables in the cast include Reb Brown, who really plays every single repellent character ever found in film rolled into one. You know, asshole/jock/rapist/racist/moron/etc... you know who I'm talking about. Richard B. Shull turns up as a rival scientist/professor of Dr. Stoner.

The film tells us at the beginning, all the snakes in the film are real. So special shout-out to Strother for having to handle them all. He was bitten on-camera more than once. If you don't like snakes, this movie might not be for you because, after Martin, they are the real stars of the show.

Barry's Cinematic Catharsis website can be found here. Thanks, again, to Barry for asking me to contribute even though I do not have a blog.