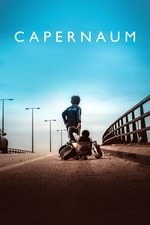 Capernaum is for people who think that the ultimate function of cinema is to make you feel sympathy for fictional people, and that political cinema is cinema that makes you feel sympathy for people who are less fortunate than you. It observes, in a frame story, the tribulations of an approximately 12-year-old boy, Zain, who fails to prevent his parents from marrying off his younger sister, runs away, and manages to fend for himself before returning home. There, he stabs the husband of his younger sister, who died in childbirth in his accent. We hear his tale as he recounts it in court, not as a defendant but as a plaintiff suing his parents for having given birth to him despite lacking the means to adequately provide for their children.

Capernaum is both blinkered and determined to make a point, a combination that lands it somewhere between Social Darwinist and Eugenicist. There are small gestures toward the political with the significant roles played in the story by an Ethiopian immigrant, a Syrian refugee, and a man who procures—for a hefty price—everything from forged identity papers to real travel arrangements for those who need them, but Capernaum's understanding of these people is a simplistic and reductive humanism. Director Nadine Labaki makes no effort to distinguish or analogize the situations of an adult Ethiopian immigrant working whatever jobs she can find, a Syrian refugee, and an impoverished Lebanese native (and, for that matter, Zain's parents) or to illustrate how shared struggles build solidarity. The only thing the film seems willing to concede is that these people drew a bad lot. One would hardly think to connect this bad lot with the Lebanese Civil War and the French and British imperialist aims that contributed to it, and the relationship between that war and the one waging in Syria that made one of Capernaum’s characters a refugee is never contemplated.

The only explanation the film is willing to venture to explain any of the misfortune it depicts is the one that frames the story: the decision of a poor couple to have children, itself divorced from any greater sociopolitical context. Capernaum is the filmmaking of personal responsibility writ large, in which those who—because of war, corruption, colonialism and imperialism, inequality, patriarchal and religious fundamentalism, or whatever else—are unable to properly care for themselves and their families ought not to have had families at all, and in which the one boy, the hero who must use his wit to defraud others because he has no other way of getting by, is able to overcome his parents' sin and have his personhood and worthiness affirmed and recognized in the end.

There are moments in Capernaum that are undeniably moving, including many of those in which Zain is caring for the toddler of the Ethiopian immigrant who takes him in, and the performance of Zain Al Rafeea, present in every scene, is nothing short of astonishing. Labaki's control of tone and craft, in general, are strong, but these virtues do not compensate for its myriad failures; on the contrary, they exacerbate them. They support Capernaum’s illusion and therefore make an audience more receptive to the poison medicine it serves.

All of this would be reason enough to make the acclaim the film is receiving baffling, but it is worth examining precisely why that acclaim is happening and where it is coming from. Capernaum, like Labaki's two previous features, had its world premiere at the Cannes Film Festival. It’s worth stating the obvious here: the Cannes Film Festival is a festival that specializes in international art house cinema. Films that play at Cannes are generally not being made for the people of the country that their filmmakers hail from, but for a bourgeois, international audience situated especially in the United States and Europe. In other words, the people meant to see Capernaum are the very people whose tax dollars have historically contributed to the conditions the film decries. What it offers in lieu of the warranted confrontation is a chance to concomitantly become "aware" of the hardships of people less fortunate than oneself, and to relocate one's own complicity in those hardships to the personal failings of those it depicts.