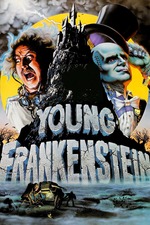 Directed by Mel Brooks and starring Gene Wilder with Marty Feldman and Teri Garr, this comedy films parodies old horror films like the original Frankenstein. However, it also functions as a drama in its own right much like the original Frankenstein films. Wilder is a professor and the grandson of Victor Frankenstein. The thing is, he wants nothing to do with his infamous relative, even going so far as pronouncing his name differently. However, when he inherits the family estate he must face his ancestry head on. There temptation takes over and he begins to build a creature of his very own, with horrifyingly funny results. This film has memorable moments including "Putting on the Ritz" and the Inspector's arm. I still cannot believe that Feldman's eyes get that big either! Wow.