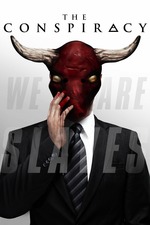 FAST SYNOPSIS
——————————-
This is a “found footage” type movie about two guys making a documentary about conspiracy theories and a man named Terrance who they believe knows more than what the world lets on.

They start to interview him and uncover something called the Tarsus Club where it’s a secret society of individuals who are believed to be manipulating certain historical events.

Magically; “Terrance” disappears; and the film makers are actually invited to try to infiltrate the club and see for themselves what’s really going on.

It turns out that there is a secret society that worships and follows strange rituals and gods and do seem to have a knack for the creepy and manipulation of things.

Now the filmmakers have a real issue on their hands.

Thoughts :
I really enjoyed this one probably more than I should have. I am a sucker for found footage. I shouldn’t be but I am. I especially the actual twist at the end — those who you think may be crazy actually aren’t crazy; etc.

It comes in at less than 1hr45 so it’s a shortish runtime and that’s always a plus.

Check it out on shudder now.