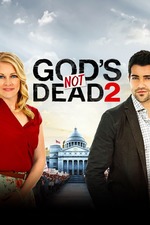 Oh God.
Specially as a Protestant, I understand the message, it's kind of cute... but first of all, if you HAVE to create a story like that, why don't you at least make it take place in a country where is it really illegal to be a Christian????? It would be so much profound and less bizarre.

That said, let's proceed to where this movie and the first of the series really piss me off:
I don't know if this series of movies bothers me more as a fan of good films or as a fan of God... or to put it even better: as a Protestant who is married to an Atheist.
According to these movies, it seems that if you're not a Christian (I mean, clearly an White-American Christian) you are an evil or (maybe worst) poor ignorant atheist and needs to be saved.
All this said, I can only believe that God is not technically dead, but He is deadly bored with these movies.

*But at least I have a good comparison now: if you're a non-christian person and didn't like how you were portrayed in this movie (so simplistically flat and silly), now you know how I felt, as a religious woman, when I saw the first chapter of the handmaid's tale. THAT'S EXACTLY HOW I FELT.

Hector and the Search for Happiness