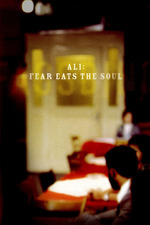 My glorious introduction to Fassbinder. I am very excited to explore his filmography further.

The opening thirty or so minutes were astoundingly beautiful, my heart felt warm and tender, and yet great pain, much like our protagonists, who were deemed doomed from the word go. And yet, I watched as I felt a genuine bond start to form between these two, very unique, people.

And I mean people. Sure this movie never lost sight of its agenda, and I’m glad it didn’t, but it didn’t feel like characters simply created for a message, or a story, it felt like two real human beings forming a connection. Maybe this was the case, even if not romantic, but making a film is a truly bonding experience, so this is where I want to credit Fassbinder to the highest degree. He managed to capture a feeling that lingered in the air throughout his entire picture, it was never about the romance, just the bond these two characters felt on an extremely deep level, which is what it’s like to fall in love. He looks past all the common, societal, definitions of how to express love, and translates it perfectly through celluloid.

So that was a tangent.

First thirty minutes - invested. Then it continued to stack piles of shit on Emmi and Ali, especially in relation to one another, but also individually. As the film was closing in on the hour mark, I started to fear that this non-stop onslaught of shit was going to push it too far into melodramatic. It was always in the realm, but was always in service to the grander story and message, but I began to get worried.

Then Fassbinder solved the problem and sent our lovely people on a vacation that the audience (unfortunately) doesn’t get to see (I’m sure that’d be an equally beautiful movie in its own right; Ali’s reaction to being asked how the trip was sells this in my mind). When they return it gets an almost It’s a Wonderful Life vibe, and I was ecstatic. Again keeping in the realm of melodrama, but never extending too far everything started to turn around for our couple. Everyone started to be kind, and my heart was warm...

For a few minutes.

Then it stared to go full throttle in a new direction. Everyone being kind out of their own selfish service. Only when they were in times of need did they accept Emmi and Ali. Emmi loves it, she wants to flaunt her relationship, her Happiness, her acceptance, her young strong foreign HUSBAND. And Ali has the almost inverse reaction. He is torn now, something is making him want to return home, to past lovers, because everything is different and she no longer ONLY needs him. He starts to be stupid, and Emmi doesn’t understand why.

I started out confused by this skewing of message, and worried where this story was headed.

And then the ending.

When Emmi and Ali finally speak again, and share another beautifully awkward dance. Their conversation had so much heart, pain, and genuine LOVE, that tears started to form. No one relationship is the same. Everyone has their baggage, their sins, their compulsions, their flaws, their egos, their desires, because everyone is human. And love is still love. So we see Ali and Emmi connect once again like they did on that first fateful night.

Then he falls, so my tears never fell, because I was both confused and concerned. Admittedly it felt like a rushed ending, and it’s not my favorite thing ever (if it faded to black while they were still dancing it would have been), but it proposes a good long thought on what’s to come for our protagonists. The life, and cycle, they’re going to continue on. It’d be like if Phantom Thread ended when Reynolds got sick for the first time. I see it being some cycle like that from what the doctor said.

In the end it all works because of Fassbinder’s consistent tonal control over the film. It’s cinematography was strikingly simplistic, and in that it was showy. The perfect blend. Amazing costume and set color coordination (art direction as a whole).

The fact I wrote this much confirms I’m giving this five stars. I didn’t know at the top. But I sure as hell know at the bottom.

Near the end of the film, When Emmi is waiting for Ali because he hasn’t been home in over a day, and she rushes out in the hall and it’s only the landlord’s son, and then she starts crying, and he (having been like the only person to be like, “yeah there’s nothing wrong with this relationship” from the getgo) Just looks at her, pauses, and deadpan says “goodnight”, and then exaggeratedly slow walks around a corner and up some stairs, while we are left to watch her cry with some (honestly) pretty bad overdubbed crying.... I don’t remember the last time I laughed so hard.