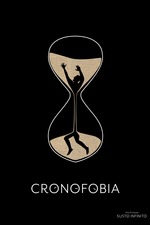 Ladies and gentlemen, a new strong talent has arrived. Fellow Letterboxd user Luis Calil has made the strongest short I've seen from anyone thus far (you can check out what I’ve watched here). Maybe I'm biased towards this type of trippy, sci-fi, time bending, hooplah, because I've attempted to write something similar numerous times, but was never able to quite crack the code to make it effective; Luis has, and it's damn well worth your time ( honestly you should probably just jump to the bottom and watch this -link and password are there). It's not perfect, and I very well may nit-pick a few points, and that's only because this thing has such a plethora of potential packed in, and knowing this is just the start, is nothing but exciting.

Let's start with the broad strokes, actually. As far as craft goes, this thing is damn near impeccable. Aside from the kitchen (which felt constraint, but not in an interesting way, but a, forced by location, way), this thing is excellently shot. The quality itself is extremely pleasant, and the constant momentum being propelled by the camera is gorgeous. There are more than a couple shots utilizing the disorienting nature of mirrors that literally made me pause and catch my breath. The tunnel transition, and the following shot outside the car is actual perfection, and just film-making at it's highest form (my notes indicated it deserved a *chef's kiss*). Also those Cityscapes, with the time-lapsed clouds after the day/night sequence (which I'll get too), are astoundingly beautiful as well.

It's not just pretty to look at though; sonically it's incredibly impressive. The score slaps, allllll the way through (I'm not crazy about those few piano notes once he's out of the car, but they are far from detrimental). It's reminiscent of that same anxietal drive from some of PTA's best work, but way more synthy; which gives it the perfect texture to fit it's sci-fi concept. Sound design is also very hard to do, especially on an independent scale (I assume this didn't have a large budget), and let me tell you, it's incredibly dynamic, and seamless. If there was ADR, or inserted effects (aside from the message from the girlfriend - that was clearly added in), and obviously there had to be... it was hard to notice. A lot of care and craft was put into this baby.

The editing cannot go unsung, because it may be the truest hero of the story. I'd like to pretend I don't know that Luis is a big fan of Carruth, but I can't help but notice, and also note, he's taken his propensity for drive to his own level. This thing is kind of a linear narrative, that's driven through time-skipping montage. It never gives a second to breath. There are tons of cuts, but that only adds to this pressure that feels like it's naturally mounting in every moment. Something as much as a cat sitting on the floor, or a phone dying, or walking around the room, can suddenly feel as tense as any great thriller. There's also the aforementioned Day/Night sequence, which is short, but the perfect amount of artistic (surrealistic?) inclusion that I found myself pulled into this hypnotic majesty, that's terrifying in concept, but beautiful in execution (I imagine it was a nightmare to actually put together (though now I'm thinking of a few tricks that maybe wouldn't make it horrid?)). Luis clearly has a sense of rhythm in this department, never letting the tone, mood, or rhythm modulate far from the path.

Which now this leads me to the most conundrum inducing portion of the film; the script. In conception, the thematic subtext, and visual storytelling, this thing is on fire; but aside from that, it's not perfect. A lot of the dialogue is flat, or plain not good. Once the music kicks in the dialogue definitely gets better, but in that opening setup, it's pretty rough. Also, in that regard, I think the pre-music section is a little long. Luis wants to have the world established prior to things gettin' all wild, but I don't think it's even necessary; feels like bloat from a lack of confidence in the short film medium (and I'm telling you from experiencing this in my own work). I also don't like all the "real world" explanations; sure, it could be argued that adds some layer of dramatics, but I found it kind of annoying, frankly. I'm referring to the surgery, and the radio talking about the particle accelerator collapsing; I wish this just went for the inexplicable sci-fi route, especially being it's a short film - let the film's magic do the talking. Because, when you add in those real world elements, I think it takes away from the beautiful subtext. (random note I couldn't natural fit-in; I'm 50/50 on using the talk-to-text as a expository/visual function - sometimes it's extremely great and effective, and sometimes grating)

This film feels like it's about depression, more than anything. It's so intense, you don't do anything. Time passes, and you don't even realize it. If nothing changes, then why even do anything? There's people all around, but how are you to notice? There's this incredible feeling of loneliness, but in fact, so many people feel this way, but we're all stuck in our own depressive bubbles, we can't even see each other; caught in our own repetitive minutiae, which eventually takes it's catatonic form. There's a deep, resounding sadness, that is 100% delivered by the end, but truthfully felt the whole way through. This is from both the lead performance, and all the previously expounded film-making elements, that beautiful coalesce into an extremely focused short film. No matter any qualms, and nitpicks, this thing is hauntingly effective, and I've been thinking about it quite a bit; truthfully it's inspiring.

So all-in-all, this is an incredibly impressive, and effective, short film, that tackles a plethora of my fascinations, in a way that's confident, invigorating, and smooth. Not without flaws, but there's so much more to admire, that I'm almost scared to see what Luis will be able to achieve in the future. This is the real, fucking, deal, folks. Oh! Of course there's bonus points for anything that references The National.

Seriously, do yourself the favor, and watch it here (password: crono).