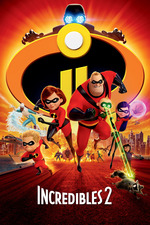 When I initially saw Incredibles 2 in theatres, I felt conflicted. I grew up with the first movie, watched it over and over, and it is still a masterpiece to this day. A sequel was never going to rekindle that magic, partly because the first film is so steeped in my own nostalgia.
But now, after some distance, rewatching Incredibles 2 for the third time, I can't say I've been won over.

The family part of the movie is still wonderful. The plot of Bob trying to manage the kids is far more entertaining than any conflict the villain dishes up. The voice acting is still great, the action is well executed, so what gives?

Unfortunately, none of the new characters the film introduces feel compelling in the slightest. The Screenslaver is a non-presence, and their motivation feels far less fleshed out than Syndrome's in the first movie. But above all else, Incredibles 2 just feels far less visceral than the first movie. There is not a moment in The Incredibles that sticks out as pandering to kids, and there is peril and danger that feels genuinely tense, even scary for a child. But there's also an energy to that film, a kineticism and mystery, that Incredibles 2 is lacking.

Making a sequel is hard. The Parr family comes together in the first film, how do you write another arc without breaking them apart? Incredibles 2 tries its best, but in the end, it just wasn't compelling enough to be memorable.