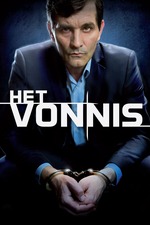 To file the Flemish director Jan Verheyen under the category 'controversial' should be a tad exaggerated, but at least he catches a lot of wind in everything he does. He has an opinion, about almost everything, but especially on culture-related stuff. He's not really loved by film critics or movie geeks, but he does manage to get the people to the cinema. And that's how he keeps making movies.

This one is about a guy who loses hos wife and daughter as a result from an assault, but the culprit is released because of procedural errors during the trial. And the guy gets his revenge.
An sich, the theme can be interesting, but in typical Verheyen-style it's brought way too explanatory and populistic, so we have to endure a painful scene, with bad acting from competent actors, to explain what exactly is going on. Jan, we understand, do not underestimate the audience. Please continue with your story.

Every now and then he shows some glimpses of talent, it features some tense scenes and the concluding lawyer monologues are well done. All these elements kind of save the day wrapping this up as a shameless mediocre experience.