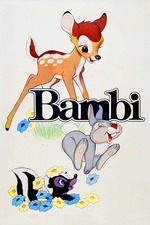 This is rather astonishing. Barring a few notable exceptions, most animal-centered films go out of their way to humanize the animals, to show them as living in a human-like society with flourishes of animal-like behavior. Here, the film emphasizes that the world they live in is that of animals*. They do this by rooting the narrative in animal behavior (hibernation, for instance) and more importantly by contrasting them with the villain Man. Making humans the villain clearly delineates this world between animal and human.

This is important. What would be seen as a neglectful father or a sexist romance is instead just animal behavior. You can see distinctions between types of animals and their courtship behavior. It's not a monolithic or ideal society; it's simply how animals act. It's based on observation. When Bambi locks antlers with Ronno, he's not some male human punching out a rival; he's just a deer, no matter how much he speaks.

This line is blurred at times, of course. Friend Owl's speech about being twitterpated crosses over pretty firmly, as far as my non-owl-expertise can tell, but overall, the film is about animals, a celebration of life in the forest. And it's gorgeous. The backgrounds are painted masterpieces; the animation is a mixture of bright, cute Disney animals with just enough realism to be alive and somehow psychedelic colors running through the frame. It's a warm experience.

One moment stands out, one that blends human and animal behavior. When Faline first meets Bambi, and Bambi hides bashfully behind his mother's legs, it's so tender, I almost cried. He's so innocent, so pure, that it evokes a kind of love and joy that I cannot express. It's both sympathetic and adoring. It's one of the gentlest, sweetest moments on film.

* Because it would be cumbersome to say "non-human animals" or whatever, I'm just being lazy, but of course, humans are animals. You know what I mean above.