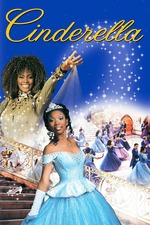 The slipper is obviously magical in this version of events (and yes, this is a version of historical events), not just because it's spun out of nowhere, but because it never shatters. In most versions, it's like this, but they take the time to call it out here, with Lionel asking about the whole made of glass thing. But it always had some sort of magic in it, because how could a glass slipper not be of the right size for multiple girls in one country, even a little close? Oh, she had exceptionally tiny feet, or a weird shape, maybe? This is nonsense. Shoes aren't gloves. So the glass slippers are magical in many ways, and no one really talks about these other properties.

The older versions of this played on repeat in my parents' house when I was growing up. It was one of those films I claimed not to like but secretly loved, one of those films that made me disconnect, made me dysphoric before I understood what that meant, because I felt weird, felt wrong identifying with something so hard gender coded. I perceived nothing about it that I could claim to be made for boys; my limited understanding of gender excluded me. Secretly, I have always loved the songs, loved the sets, loved the costumes. When this version came out, I think my whole family ignored it; the older ones were sacred cows. Watching it now, the multi-racial casting would be the main draw if not for the nostalgic connection to the songs.

The casting deserves praise, not just because of the diversity. Brandy, Whitney Houston, and Bernadette Peters fill the songs with life, using their talents to mine the emotional content and find potency in even the most saccharine showtune sentiments. Peters' role is surprisingly nuanced--not deep and explored like it might be, but more than the caricature the stepmother usually is. As she sings about her aversion to love, and with a few hints here and there, you sense she feels betrayed by the loss of her husband, that she has changed into a crueler person after his death. You sense the answer to why Cinderella's father ever might have married her, if only fleetingly. The depictions of the stepmother and stepsisters has always been one of the more egregious sources of problems with this story; sizeism is not uncommon. "The Stepsisters' Lament" has always struck me as a sadder song than intended, its irony driven away by identifying with being less than dainty and soft and perfect. They don't fare better here, despite the efforts to be more inclusive in casting. (Lionel is also a much funnier presence in this.)

It's interesting that this problem crops up in every version, because the central message in the music seems to be about being oneself. It's a standard, vapid sort of fairytale message, but it plays out effectively. Especially in this version, they take pains to show the prince falling in love before the make over moment. Between "In My Own Little Corner"'s themes of "being whoever you want to be" and "Do I Love You Because You're Beautiful?"'s questioning of causation, the songs convey understanding a person (either oneself or another) as part of loving that person. Cinderella's daydreaming is not just an escape, but a form of self-exploration, a way to hold tightly to her identity (why might a trans woman relate to this?). "Beautiful" seems to question the entire premise of love at first sight, positing understanding another as the path to true love, not merely seeing them. The story emphasizes this as the two connect quickly about what they have in common, something on a basic emotional level, a shared experience in broad terms. Even the stepmother's "Falling in Love With Love" serves this idea. The film seems to both question its own story and embrace it.

On watching this version, I was struck by how the three-song run of "Ten Minues Ago," "Lament," and "Beautiful" is so strong. These are my favorites from the film and always have been along with "Corner." They also end in a beautiful kiss, sealing the fairytale prince/princess romance, one of those grand Moments that works only because you've been told it works. In this version, it's a kiss between a Filipino man and an African-American woman, and it aired in prime time on broadcast television, so it has a certain amount of social value just by existing. I was also struck by how all four of those songs put their value in imagination ("Impossible" also does this). This is another aspect of the film/music I have always related to; I've spent a lot of time in my own little worlds.

I've just spent a weekend with my family, and in the course of it, I happened to reconnect with some things from my childhood, old games, old movies, old memories. It's been a nostalgic few days, capped off (I hope) with this film. Nostalgia is tricky for me, but one thing I've noticed about how I revisit old favorites, things from childhood, especially from my teen years, is this idea of retconning. I have this need to re-experience things from my formative years because I need to see them again through a woman's eyes, not the boy that haunts me. I need to redefine my past so that when I remember these things, I don't come face-to-face with dysphoria and regret. I need to know these things as if I had the same understanding of self that I do now. I don't know if other girls like me go through this process or something similar. It's not about rewriting history (though that would be nice); it's about re-understanding it. This happened to be here when I got back from my weekend away, and it seems fitting to watch a reimagining of something so integral to my childhood. Perhaps it resonated more strongly with me tonight in that context.