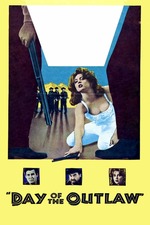 The Western-in-blizzard subgenre is always a bleak, brutal one, it seems. This film has three standout sequences: a fist fight in the snow, the coerced dance sequence, and the final path into winter.

The first is impressive in its violence, more blunt and nasty than these things tend to be, protracted and ugly, the sort of fight that these days would be bloodier but still comes off as painful for all involved. It's an emotional battle, and one that ends with coldness and something that passed for justice once upon a time. It's the sort of moment that leaves you feeling dirty for rooting for anyone at all. And yet, it's not the greyest moment of the film.

The coerced dance sequence is the most black-and-white, however. An extended rape metaphor that threatens to become less than metaphorical at any moment, threatens to tarnish your old grandpa view of Burl Ives forever. It's uncomfortable on many levels, not least of which is that it seems like the lesser of evils to watch the women acquiesce to dancing with these brigands, helpless in their arms, alive but spiritually limp at the violation of their agency. (The film's biggest flaw is how the women are more or less props; even the tagline suggets it.)

The final scene, the blinding cold march into winter is as vicious an ending as any from the Code days. I feel like this film violated the Hays code in many ways, though I guess it probably didn't? This would be pretty late in the Code days, though, so boundaries were pushed here. It's not clear who was good, only who was worse, and who died.