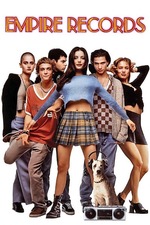 I have previously been uncomfortable with the depiction of Lucas, wondering if this weird performance was some neurodivergent mockery, but there's a line that stood out this time that reminded me it is very much not: AJ calls him out for being weird, comparing him inappropriately to Mr. Miyagi. So we have a casually racist line, but also, thankfully, Lucas is just a freaked out kid trying to stay calm in the face of losing $9,000 and destroying what he loved.

This is one of the most deeply flawed movies I love. So much. I don't know how I didn't have it in my life before. They coulda chosen a better reference than Karate Kid, though. We don't need racism here, thank you very much.

So anyway here's the meme: which Empire Records character are you? Tag yourself in comments.

Corey:
* Wants to please
* Closet speed freak
* Sweet but capable of ripping your head off

Joe:
* Hard knocks but kind
* A bit of a temper
* Good manager

Berko:
* Inconsiderate but not malicious
* Musically talented
* Not afraid to share center stage

AJ:
* Talented artist
* Sincere but awkward
* Not afraid to dance

Jane:
* Cooler than her job
* Smarter than everyone else
* Just wants something real

Mitch:
* Dreams of being a toilet salesman
* Doesn't like kids or music
* Asshole

Older Woman Who Sings Rex Manning Like Opera:
* Unabashed in her love of Rex Manning
* Has a voice on her
* A dose of reality for your ego