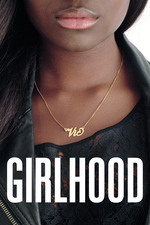 Yes, faceless teacher, it was your fault. She taunts and sneers and then expects Marieme to answer her when there's some suggestion of something more, deeper here, but of course, she's become untrustworthy, another authority figure who is there to hurt and punish, not to nurture or protect. In a not-really-bygone era, from this moment, Marieme would then walk into the arms of bad influences, but in this slice of European harsh reality, akin to Moodysson and Breillat in some ways, she's already under bad influences. The girl gang she joins is the most nurturing, protective, and caring force in her life, and not in an ironic way.

This film is framed beautifully, so many moments of the city being used to make the four girls into a perfect picture, creating a sense of closeness even as they traverse vast concrete deserts. It focuses in on their bodies not in moments of exploitative prurience but in moments of movement and connection, showing dance moves, tender gestures, and faces in closeup. Every shot is composed, showing (or in some excellent moments, not showing) characters often in still moments, letting the viewer absorb details like the shimmering of a zipper or the absence of hair, in some cases showing plot/character and in some cases, simply letting the image speak for itself. And yet, there's a chill to the visuals, even in tender moments, and saturations that distort rather than emphasize, and these factors rob some of the more beautiful images of their power.

The portrayal of friendship in this is so moving (especially as its progress is tracked through song and dance in a natural, non-Musical way) that the eventual dissociation of the plot from that part of the story is jarring and disappointing, even if slightly inevitable, as the escape provided by Marieme's journey into camaraderie is derailed by the blood family that has failed her. What follows is essentially a brutal coming-of-age, but one informed by the strength found in her time with Lady, Fily, and Adiatou.