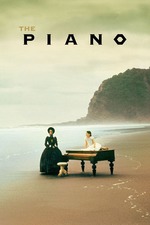 This film has the wrong ending. It was such a startlingly wrong ending that I looked it up to confirm--Campion herself has said she intended a different ending. While the film's wrong ending is fine, really, it seems tacked on. And while it conveys a certain sense of what the film is about, it muddles it slightly. What this film is about is a woman's passion, about her defining herself through something other than a man (namely, her piano), and about how being bound to a man--being controlled by one--diminishes her.

If taken literally, well, that's a flawed tale, but she's more a metaphor for the representation of women. She's every silent female character who serves only to be a man's possession in every film, television show, book, and play ever written. She defies this, having an identity as a pianist (or as anything else) instead, and the conflict arises when this identity is threatened. Indeed, it shows how far someone will go for their passions, for their identity, and how sharing that can lead to something deeper with other people.

The ending is flawed simply because it should end with the loss of her phylactery. Like King Arthur losing his sword, her losing her piano should mark her end, for it symbolizes the loss of her identity. Instead, she continues on, marrying her love of the piano and her love of Baines, and while that's fine--it works with the idea of sharing passions and creating new identities--I feel like it would be stronger (perhaps for me alone, also more resonant) if her identity remained wholly outside that of a man's.