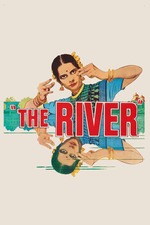 This deserves a better review than I can write tonight.

Every narrative thread in this film reinforces the central themes of death and rebirth. There are several tales here, most centered on the one-legged Captain John. He is the subject of desire for several of the young ladies living in the area to him as he stays with his cousin, Mr. John. Each of these plotlines culminates in pivotal moments that Captain John describes as moments of either death or birth. As we watch him struggle with his injury and bemoan his outsider status, we see his journey along with the others toward completing a cycle.

Without going into a synopsis of the film, suffice it to say that there's more to each character than simply their connection to Captain John. Renoir, with his direction, and Godden, with his writing, depict characters who not just have independent desires and agency, but ones that are rooted in who they are as characters. The plotlines that flow from them are natural extensions of the characters. While the lead character's is the most concerned with Captain John and her infatuation with him, there is an undercurrent of coming-of-age to her story. The other two suitors for John's affections get less focus, but there are hints at who and what they are. Valerie unfortunately gets a bit short shrift, but the film manages to suggest there's more to her than merely her interest in John. Indeed, her interest is colored by a certain amount of outright cruelty. It's almost as if she toys with him. Meanwhile, Melanie, who is the daughter of John's cousin, struggles with her own mixed identity--being half-British, half-Indian.

The film follows these--mostly the lead's--journeys as well as John's own struggle to come to terms with his injury (he lost his leg in the war) and a subplot involving the lead (Harriet)'s young brother. With Valerie, there is a passionate kiss (a birth, a connection) that leads to a death (Harriet's broken heart). With Melanie, there is a pair of tight discussions, blunt examinations of her feelings and John's. As she struggles with her feelings, she also comes to admit her own dislike of herself (a death) that leads eventually to acceptance (a birth). Meanwhile, Harriet's story is much more involved, a series of minor births and deaths, and both literally come to her family in the process.

Harriet is a talented poet and storyteller, and she has an interesting understanding of Hindu religion. In the middle of the film, she seeks to convey her feelings and capture John's heart and mind with a tale she has written that depicts a folktale about a woman who seeks to avoid her traditional role, only to find that it ultimately brings her exactly what she wanted. Taken less literally, it suggests that all is not as it seems. It's a strange juxtaposition. At face value, it says nothing about her connection with John, but it seems she is suggesting his perception of her could/should change.

But there's a broader context that interests me here. The film is set in imperial India, features a British family that literally owns a sweatshop, yet seems to integrate their culture with the local culture. While the film is clearly British imperial India, it was made in the recent wake of Indian independence (a death and birth if ever I heard of one) from Britain. No matter that India had independence at this time, their culture and existence was still deeply affected by British imperialism. The film's depiction of the integration of Christianity and Hinduism, of British culture and Indian culture, has a lot of undertones in that context that I can't entirely unpack. I don't have the perspective nor historical knowledge to fully grasp everything this could be suggesting, but if I go back to the stated themes of the film, there's a few ideas I feel are worth sharing.

Neither culture is depicted without its flaws in the film. The sweatshop is not notably negatively portrayed, but it is called a sweatshop by its owner. The narration suggests that there is a love there for the product made, which is a rather materialistic view. While the negative portrayal of sweatshops might be a more modern perspective (I have no idea), it certainly carried a negative connotation to me as I watched. It seems a place of death, but as a source of resource and creation--it is a factory--it is also a place of birth. The major death in the film is faciliated by a local--and inspired by another, indirectly and unintentionally--but there is also a redemption for the facilitator. The death is brought on by a misconception of an aspect of Indian life. It is suggested that being of two worlds is a source of conflict for Melanie, as it makes her an outsider, but ultimately, she comes to terms with this. And the tale Harriet tells suggests that an adherence to Indian traditions might let them see there is more to the partners they find than they believed--and that faith in their god will bring them through.

There's a suggestion, over and over again, that not everything is what it seems, and that once we understand that, when the illusion breaks (death), we are enriched (rebirth). It preaches caution, but also suggests that there is value in experience, in the journey to understanding. It suggests that there is a cycle, and that death and rebirth are natural parts of that cycle. It suggests that the upheaval of revolution (there's another circle right there) is natural as well, and that the new born India will see this over and over again, much as wel all will experience this cycle.

Again, I don't have the full context to comment. Perhaps I'm even just wrong. It was a beautiful film, a melodrama and a romance, that eschewed many traditional tropes of both genres in order to focus on depicting a spiritual cycle--one that is central to Christianity, Hinduism, and the monomyth, for that matter--and I am at a loss for how to convey how completely it captures this, right down to starting and ending with similar scenes, with the change of seasons, and with Indian holidays. As I said at the start of this review, this film deserves a better write up than I can write tonight.