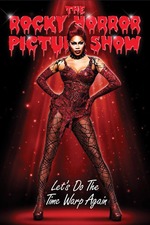 The Rocky Horror Picture Show: Let's Do the…

Frankie was always one of us.

She--and that was an important word here--was reclaimed ages ago, if not before, then certainly the moment I first laid eyes on her, sometime before I even understood who I was or who she was, when she was some genderfucking Tim Curry, the elemental form of the depraved bisexual. At that instant, she became a trans goddess. When I heard they had cast Laverne Cox in this role, I was happy to hear she was getting a great role and that the role was going to someone who deserved to play it. And, really, that someone Like Me was playing this role. There are worlds between me and Laverne Cox, but the one thing I am certain we share is the crucial ingredient. Reading interviews with her, it's clear she also found some of those imperative clues to herself within the original and its attendant subculture. This was not so much an act of reclamation as the codification of it.

Of course, it's on television. Of course, it's laden with the original's problems. Of course, it's flawed, flawed in ways that hamper the empowering effect of this moment. This is, after all, the world in which no one is quite sure if we deserve to live or not. This moment of empowerment is completely defeated.

What it did not give us is the trans and queer version of this moment that we deserve. There is a moment, in the pool, where Brad and Rocky are obviously going to kiss, but the film pulls away hard from this moment, recoiling. It felt to me (I said a lot of this to Claire Diane already, so forgive the repetitions--also forgive me, Claireby, if I steal some of your thoughts inadvertently) as if the censors had told them just how much they could show. It is a perfect example of all of the flaws inherent to this production, one of the most blatant examples of the homophobic atmosphere. This was further emphasized by the fact that Frankie's interactions with Brad and Rocky were less censored (though still censored) than hers with Janet. Oddly, this had the effect of making the film less transmisogynistic and more homophobic than it otherwise could have been, by recognizing quietly the innate womanhood of Laverne Cox--and rejecting any moment with her character that might be construed as sapphic.

That fact, that she is known to be herself, that she is "she" even in the context of the film alleviated one of my biggest worries--that Frankie's gender would require misgendering Laverne Cox, and therefore, would go toward misconceptions of trans women in general--but I could not imagine her signing onto this and letting that happen without some concession to trans rights. I smiled when I realized the character was "she" and not "he." Her introduction was, however, tainted by a few failures in execution, notably the decision not to change the lyrics to "Sweet Transvestite" or in any way otherwise counteract the problematic nature of the song. Her being femme also contributed to the unqueering of the film in a way that contributed to the overall watered down atmosphere.

That atmosphere was, in the original, a charged, rock'n'roll, glam, erotic revolt against repression that called to the misfits of the world. In this version, it is reduced to a caricature. The framing device immediately suggests that the creators were co-opting the subculture's bastions in the worst way, turning the film into a reduced mimicry rather than an homage. It ignored the spirit of the shadowcasts and throws and callbacks by cherrypicking a few easy ones and inserting them as interjections rather than communal outbreaks. It sucked the soul out of it, then spat it back out as a package for the very people this film was a haven from for so long. The music is altered, infused with more Broadway sleek than a dingy, rain-soaked set full of tired, cold, desperate actors. The pace feels wrong because the songs feel less energized, as if the boogie and rhythm and snarl and bombast they used to have were integral to the feel of the film. (And the humor! The extended "creature of the night" piece of "Touch-a Touch-a Touch Me" being missing disappointed me greatly. The more enthusiastic pronunciations always made me smile.) The sets lack the pop Americana pastiche that the original indulged in. Instead of allowing subtle references to history and art and media interweave with the setting and plot and characters, it stripped them away and put up a movie theatre shell around it. Another crucial moment that shows how this version alters the original's tone is "Time Warp," where instead of a goofy, jagged leg kick, we have this quasi-balletic Broadway slide and over-blown choreography. We have showtunes, not rock'n'roll. We have coordination over chaos, and that is utterly against what the original managed.

There is value to making something your own when recreating it, but what this version did was try to make something that belonged personally to so many (that is, it was individually "your own" to millions) and turned it into something the creators hoped was for everyone on a broad, bland, empty basis. It took the long fought for reclamations we all have torn from this problematic snarl musical and appropriated it back, forcing it into the very boxes it strove against. The biggest problem with this is that it retains the original's problems, but since there's no space for reclamation or empowerment, it then emphasizes them. The most egregious is the coercive manner Frankie seduces Brad and Janet. The original's power was in being a statement against sexual repression, which especially resonates with many queer and trans people and many feminists, which alleviated the disturbing deceptions and forceful methods subtext. It made it a symbol, not a statement. In this version, the context is altered such that these moments lose their symbolic energy, leaving dangerous subtext alive. (In both versions, it is notable that Frankie ultimately cedes the decision to Brand and Janet in a way that could be taken as asking for consent, but.)

Richard O'Brien came out as transgender nearly a decade ago, and knowing that gives new undertones to the story of a femme genderfuck scientist trying to create the perfect man, the story of an ostensibly cishet couple discovering their own bisexuality and sexual liberation, and the story of a incestuous pair of siblings rejecting this world. Rocky Horror has such a complicated knot of sexuality, sex, and gender at its core that it feels like anyone could watch it and find something to connect with. "Don't dream it, be it" is a powerful mantra under these circumstances. A year into my transition, Rocky Horror feels more powerful to me than ever. It was almost a year ago that I mentioned on here in a review of the original that I was going to start HRT. I feel so much better now, so much more alive, more open, closer to being whole. "Don't dream it, be it" feels like pure uplift in the context of the original, despite the melancholy surrounding the moment, and in the context of a transition narrative, the mixture of melancholy and empowerment resonates perfectly. The journey to that moment is not made easy by the repressive society we live in now; for O'Brien, it must have been a nightmare I shudder to imagine. Being further along with HRT, "Don't dream it, be it" feels like a desperate mantra, begging to be heard.

Frankie was always one of us. Seeing one of us play her should have been a nonpareil moment of triumph. Instead, once more, we are left digging through the standards and practices, the American Idol singing voices, the--as Claire and probably others put it--Hot Topic-ification, the appropriative ignorance, and the lazy cover song approach for gems, pearls of ourselves where we should be finding mountains of trans and queer wealth. Laverne Cox's very presence is radical; her performance is incredible. She is unfortunately performing within a context that defeats even her formidable talent and political acumen. Her voice, her outfits, her body language, her contextualizing interviews and press tours all do as much as she can to promote who she is and why she matters, and for some, it will be loud enough to break through. I take heart in her presence, and see why she would have done this--even beyond simply the opportunity to play Frankie--but the machinery around her keeps this from being the paean we deserve.

The answer is was always will be to continue to deconstruct, to reclaim, to reimagine even our sacred texts. Rocky Horror with a black trans lead could have been a celebration of decades of struggle, of the redefining of the ongoing sexual revolution, and of the role of blackness in the American pop culture the original conglomerated and worshiped. (It could have reimagined Dr. Scott to better avoid ableist implications.) It could have been bizarre, full of new ideas, new interpretations, new weirdness. It could have been a modern beacon to the outsiders and freaks who need time warps, floorshows, and rock'n'roll to find their identities, their souls, their hearts. It could have been something with our queer/trans voices in it, crystal clear and in the moment, rather than distorted by decades of repression and abuse and bigotry and fear. Instead, it took what was once a new voice and replaced it with the same old voices that have always been, and muted the power of one of the very few black trans femme icons in the world. Thank god she still seemed somewhat above it, and thank god she knows how to use every ounce of exposure to keep speaking for girls like us.

Despite seeming to erase us from the history of this film, the story remains Rocky Horror. I have the original film soundtrack on repeat now, and the overt sexuality of the film manages to break through the censors' worst intentions. I can't speak for everyone else, but I am completely gay for Frankie and Janet. It made me want to like this even more than I did, and that in turn means I liked it even more than I did. That's just how it goes when your representation choices are so slim--but for the few choices we have, this is a special one, despite it all.