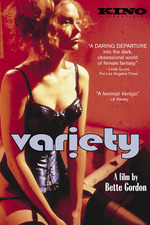 As Christine recites her erotic monologues, my heart quickened. The almost deadpan delivery, the disinterest of her ostensible boyfriend, the static shots, the background noise all combine to make her verbal depictions of mysterious sex scenes intense, making you wonder when the other shoe will drop. "Why are you doing this?" "I'm sharing my life." The underlying message is simple and scathingly put: female sexuality is a radical act in the eyes of men. Not conforming to the presumed roles of the men in her life, Christine confounds all three of the men in her orbit. As they each fail to fulfill her--the dull routine one who cannot fathom her sexuality, the mysterious and creepy one who strands her, and the kinda pathetic one who never connects with her--she becomes more and more obsessed with the only one who seemed to show any interest.

What this film shows is the idea that it's not eroticism, but patriarchy that is the flaw with the sleazier side of sex. It's not Christine's sexuality that is at fault here; it's the men who seek to control, use, or assault her. Pornography assimilated into/distorted by capitalism certainly doesn't help, I suppose, in that rarely is it ever empowering, but it, like most media, is crafted to appeal to an audience. There's no chicken/egg argument here; the audience defines the art. The audience is not synonymous with the viewer, though, but rather, those who truly seek exploitative pleasure from it--the owners, the parasites using the performers' and creators' labor. Succumbing to that audience's expectations only creates a feedback loop that leads to sexual violence and the marginalization of women.

More than half of this film is dialogueless, a meandering journey of Christine's obsessions, through the now faded glory of New York's underbelly, gritty (in a good way, aesthetically) and trashy. Long shots and slow sequences follow multiple muted conversations as we are shown all the ugly flaws of the capitalist/criminal world that is part of the seedy universe Variety is set in. Odd angles and bad cropping make parts of it hard to watch, ugly even (why are the tops of so many heads cut off by the screen's edges?), but the details it finds while doing this are often effective at conveying the atmosphere the film needs to make its point. Lingering shots of garbage, male gaze, and awkward movements are just some of the small moments that capture the world Christine lives in.

Other facets stand out as signifiers of this bygone era. When Christine takes a smoke break, she walks into the theatre, not out. The answering machine is archaic, and I suspect its long dialtone silences and operator recordings would feel dated to people who could remember them, much less those of us too young to fathom why the machine would pick up those things. Hundreds of other little cultural signposts reflect the early 1980s, but the vicious retort this film has for the quasi-Puritanical patriarchy still resonates all the same.