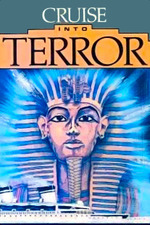 Sample dialogue from "Cruise into Terror".

After recently watching "City of the Living Dead" I realized I have seen a shitload of movies with Christopher George. Looking kind of like a dime store Dean Stockwell, this guy was a staple of 70's and early 80's genre fare, often appearing with his wife Linda Day("Piece"s,"Grizzly","Day Of The Animal's"). Looking through his filmography, one title stood out "Cruise into Terror". Reason it stood out? It's a TV movie about a cruise ship terrorized by a Sarcophagus. So basically there was no chance I wasn't going to watch this fucker, so how was it?

Pretty much as hokey as I could of imagined and that's a good thing. A bunch of past their prime actosr bicker over what to do with a Sarcophagus (sell it, throw it offboard, burn it?). Occasionally someone dies, and later we learn the devil's son is on board. I've seen my share of 70's made for TV horror and this is certainly above average when it comes to entertainment value even if its entirely in a so bad it's good manner.

This is the third time Ray Milland has popped up in this marathon. He was also in "Frogs" and "The Uncanny". He may very well pop up again as he starred in all number of crappy horror movies in the 70's.