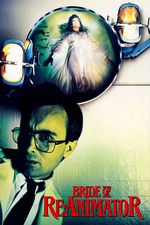 The words “for better or for worse, til death do us part” weren’t framed with the challenges lovebirds of horror face, however death often does part them. The writers at Grimoire of Horror have put together a list of our favorite horror couples featuring tales of love that are sometimes tender, sometimes tragic, mostly horrific, and always entertaining.

Though the bromance between Dan and Herbert is center stage for much of the Reanimator series, Dan and Meg’s love is a driving force in Bride of Re-Animator. Meg pays the ultimate price for their curiosity when one of their rogue experiments strangles her to death, but that doesn’t stop Dan’s love for her (twice!) as in both films he attempts to resurrect her.

Grimoire of is using Letterboxd to share film reviews and lists with friends. Join here.