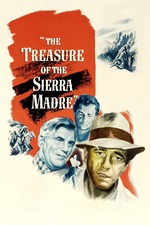 The Treasure of the Sierra Madre 1948

This movie reminds me of what Coca Cola tastes like. I mean that to be deeply complimentary, and I clarify because one time, at the film school I hated and wanted to die at, we had a guest speaker come and talk about Andrei Tarkovsky. Everyone thought he was the son! of Tarkovsky, so an otherwise very skippable educational event was well attended. But his last name was actually "Trakovsky" or something deceptively close. I do wonder how many Tarkovsky speaking gigs he booked due to America's collective dyslexia.

During the talk, he described Spielberg films as "great hamburger movies" and I've hated this-man-I-do-not-know-at-all's guts ever since. Nevertheless, this movie reminds me of Coca-Cola: brownish, tastes very good but can also decompose red meat, etc. Or maybe it is because I was drinking Coca-Cola for the first time in months last night while watching it. That's probably entirely why.

You can trace so much of 70's cinema singularly back to this one, in the way all that 70's shit is comforting in its cosmic objectivity. Good men are not rewarded with riches, only peace, and shitty men die rich and by machete.

Would love to give it five stars and call it a "master-stroke" for everyone in my life who has been waiting desperately for my take on TTOTSM (1948), but the Max Steiner score is unfortunately goofy, obvious, and was dated even back in 1948. Mad about the score. Silent film baby stuff. Max Steiner: boo!