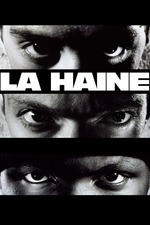 Over the last month or so I’ve been becoming more worn out with the unhinged feeling I have to analyse a film I see, thus my reviews tend to be a dumb thing I noticed or saw. Maybe this is the fact I have to do this as part of school now, as I’ve put an extraordinary amount of effort into the colours of Trainspotting and Pans Labyrinth and now watching a film that also deserves that level of dissection is an escape from introspection.

This movie has broken free of that

I didn’t know much going into this film, only that it’s french and about police (a synopsis that barely scratches the surface). But after watching it seems to be a blend of two of my favourites, Do The Right Thing (through general structure and themes) and Before Sunrise (the Paris section albeit with a much darker tone). Those two films are a basic analogy of the style and tone of this film, and to someone who likes either one of those, perfectly shows how this is an inescapably impeccable film.

However there’s something more loose that connects this film with another, one which may explain its escape from my fatigue with analysis, Trainspotting. This film feels like a extension of Trainspotting’s extension of Pulp Fiction, a french view that takes the lessons about society, the fucked up but humanised characters, and brings it to a new context that in my opinion is more timeless.

La Haine presents to you this world, a world that may be close to you or far, and makes it a world you understand and believe within minutes. You follow three characters that exemplify the downtrodden and the manipulated, giving you a true sense into how and why an underrepresented youth turn. Just like Mookee, Hubert shows how the moral high ground is eroded by the racism and systematic oppression that is faced in society and how the life of Vinz is truly inescapable.

Oppression is shown throughout in all levels of creation. The grainy black and white film shows a lack of freedom with colour, the lack of money and backing these people face, as well as societies black and white perspective of these people. The scattered loose structure, editing and direction highlight the lack of control with the narrative hook of the time posing the idea of normality in this chaos.