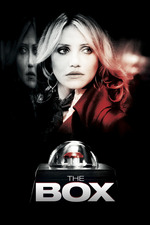 I've heard people talk shit about this movie for a while. It's been used as an example for Richard Kelly losing his grasp as an effective storyteller. The film is neither of those things, in fact, it is pretty good.

Feels very inspired by the twilight zone or an Alfred Hitchcock presents episode. This film would have actually been better as a tv episode that is less explained and more ambiguous. I wish it was more political allegory and less supernatural but the thriller aspects still work extremely well. The stylistic choices with the lighting, transitions, production design, and score are all effective in creating an eerie tone.