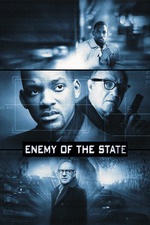 Enemy of the State

This is where Tony Scott’s filming and editing style really change. This is such a drastic change in style from his previous films — one that I think he continues for the rest of his career.

Gene Hackman and Will Smith paired up together are fantastic.

As in a few of his other films, there’s a BRUTAL Mexican Stand-off at the finale!