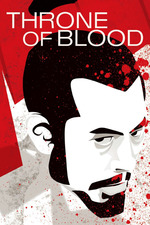 Regardless of how faithfully Throne of Blood adapts Macbeth, it stands up well on its own as a creepy Noh ghost story.

One of the first things one notices is the haunting, yet relatively sparse score by Masaru Sato—one of his earlier original scores (followed by many more, especially with Kurosawa). Other early indicia of how great this film is are the excellent practical effects courtesy of Mount Fuji, like rolling fog and swirling wind (Mount Fuji should at least be considered for an award for supporting actor here).

As usual for a Kurosawa film, Throne of Blood includes some fine shot selection and cinematography, and it features some clever editing, choreography, and off-camera work to make spirits—and entire sets—vanish into thin air in a single shot.

Toshiro Mifune's crazed snarl for nearly two hours, even when everything is coming up Milhouse ... er ... Mifunehouse, also helps to bring some ghastly energy to the film. Mifune's rabid performance in the third act literally is great enough to take on an entire army (or two), even if it kills him (spoiler alert: it does).

The first act is a bit long, but it does not feel like a chore to get to the obvious (even if the viewer has never read or watched Macbeth (it's been a while since I have, honestly)) end of the act because of plenty of mysterious visuals (and prophecies!). I am fairly critical about first acts but I often find myself making exceptions for the Kurosawas and Tarkovskys of the world, but for good reason.

Throne of Blood is not only essential Kurosawa but also not a bad choice for spooky movie season. A.