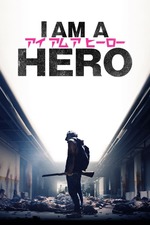 This is one of the best zombie movies I've ever seen, if not the best. The comedy lands, the action is intense, the zombies themselves are creepy af. The concept of the zombiesnis what keeps you watching even if sometimes the visuals make you want to hide behind your hands. They talk, they run, they're hungry.

Our protagonist Hideo is a proud manga artist who is struggling to get his strips sold. He's extremely likable as he floats between being too optimistic and insecure. He's constantly having visions of heroism and the spreading ZQN infection gives him a chance to rise to the occasion. He's just too damn average to make it out alive. But he's got a gun and he's gonna try.

Thoroughly hilarious, I am a Hero balances horror with comedy while not sacrificing the gory design and affect of the zombies. Jump scares are well minded and add to the joyful suspense rather than being annoyingly cheap. You never know how different zombies are going to react, or when they'll react. Everything is very exaggerated and while most of the time the way the living overcome the living dead is impossible and hard to believe it's a hell of a lot of fun to watch.