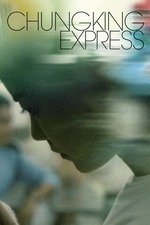 For a long time now I've wanted to get into Wong Kar-wai's filmography, so what better way to start than with arguably one of the greatest films I've seen to date, Chungking Express.

Wong infuses the film with an incredible amount of style and energy throughout. His hand-held camera is restless, always moving and shifting showcasing unusual shots that intoxicated me for its entirety while still allowing for a completely effective story.

It’s this story, essentially two separate stories loosely linked by the central location of a small take away, that’s absolutely magnificent, confusing me at first then fully gripping me with its execution in the latter stages. The two stories are beautifully told, and in the short time it takes for the films to reach its conclusion, we begin to feel a genuine bond for the characters, especially in the second, starring Tony Leung and Faye Wong, where the fabulous choice of soundtrack and beautiful sequences are filmed in such a rich, vibrant manner, that’s used perfectly to underscore the themes, showcasing that love isn't something that can easily be talked about, it's something that you express, sensing it, feeling it, long before you say anything.

Nevertheless, when all is said and done, every scene of Chungking Express plays out like a piece of art. Despite the rapid-fire way of filmmaking, it never looks like it was just thrown together, holding a slick, polished look of someone who obviously knew what they were doing and what they wanted. It’s a film unlike anything I’ve seen before, granted I haven’t exactly seen much Hong Kong cinema, but it’s still one that took me by surprise, immersing me for its entirety and making me excited to delve into this acclaimed director’s filmography more. Chungking Express may or may not be the directors best work but as a starting point, it’s one that stunned me.