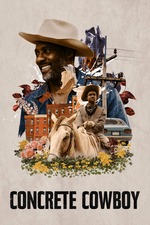 Debuting at the 2020 Toronto International Film Festival and releasing tomorrow, April 2nd, on Netflix, Concrete Cowboy marks a strong directorial debut for Ricky Staub with its unique glimpse into a world most of us never knew existed, and a fantastic lead performance from young star Caleb McLaughlin.

Based on Greg Neri’s novel Ghetto Cowboy, Ricky Staub’s Concrete Cowboy tells the story of the Fletcher Street Urban Riding Club, a non-profit organisation of Black urban cowboys who care for horses and provide a positive influence for neighbourhood kids. It's one of those rare, reframe-the-conversation films that take a very specific subculture and turn it into something universal and uplifting. Similar to how Chloé Zhao's Oscar Nominated 'Nomadland' showed us a mostly undocumented glimpse into the world of an American nomad, Concrete Cowboy, while not nearly as impactful, gives us a glimpse into another world most of us never knew about, the world of the Black cowboys.

There’s a serious lack of movies about Black cowboys or Black equestrians in general, and by telling their story in the unlikeliest of settings, North Philadelphia, Concrete Cowboy feels heart-warming and alive despite suffering from its own story problems.

Director Ricky Staub pairs a coming-of-age tale with a real Black urban equestrian institution and many of its members, giving his film a rich environment that it more than thrives in. By using the real Cowboys, many of the scenes prove to be a true inspiration to viewers. Listening to these people pour their heart and soul into the role, offering insight into a life many of us never knew about, was fascinating, and while the film undoubtedly focuses on Idris Elba's father and Caleb McLaughlin's son dynamic, the film is all the stronger when the real cowboys get their time to shine.

Nevertheless, it’s frustrating to see Concrete Cowboy stick to a template we’ve seen so many times. The film as a whole works perfectly when documenting the aspects of the Cowboy life, often proving engrossing and rather heart-warming with the real riders sharing their stories in the credits, but as a whole, it suffers from a rather generic and predictable coming-of-age storyline that within the first five minutes you've already predicted the end of. While overall the film is undoubtedly a good one, with Idris Elba, Caleb McLaughlin, and Jharrel Jerome giving three fantastic performances, it's ultimately a film that should have focused more on the people at the heart of the story than what we eventually got. There’s certainly representational value in the way it brings a conventionally rousing narrative to such unorthodox material, yet it ultimately leaves you wondering how much better the whole thing would have held together if it simply let the riders speak for themselves rather than falling into some unfortunately generic scenes. Still, it's one to check out when it hits Netflix tomorrow!
2021 Releases Ranked