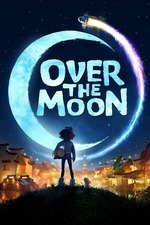 You’d think that by October an animated film would have come out to rival Pixar’s crown. Yet, from what I’ve seen very few have come close this year. Could Over the Moon be that film to rival this years Onward? Well to begin with, It’s undeniable that the colourful animation mixed with the occasional brilliant song is what makes it as good as it is, but the true highlight of the film is the brilliant score by Steven Price. It capsulated the feeling of the film and improved even the dullest of moments.

Over the next few days you’ll hear a lot of comparisons to Disney’s Coco and that’s more than merited. When did animated films become so hell bent on showcasing themes of loss and moving on to younger people? It’s like they’re trying to prepare younger people for the inevitable death of a parent. Whilst Over the Moon doesn’t take exactly the same approach to the thoughts of loss that Coco does, it’s still nevertheless works and does allow for quite the emotive storyline at points as honestly it captures the true essence of trying to get over a loved one and does it in such a sweet way.

Yet, this is exactly as advertised. It’s a sweet little kids movie that, despite being beautiful and having some brilliant songs, doesn’t break any new ground. Over the Moon starts off extremely strong with the opening being quite the spectacle to watch as Netflix fully embraces the emotive storyline and Chinese culture, however, once the story takes a turn and focuses more on the antics on the moon, it unfortunately began to loose me. Whilst I can see the appeal many of the goofy childish designed side characters had (mainly the annoying green blob), compared to the realistic feeling of the beginning it just didn’t feel right and began to pull me out of the film more and more with its glaring animation shift and subsequent tonal shifts throughout.

At the end of the day, Over the Moon is a film designed to cater towards the younger demographic and because of that my negatives can also be seen as positives for some people. Children will love this and so will many adults, it deals with a more personal storyline and does it with a unique flair, passion and style that sucks you in from the very beginning and, despite having some hiccups along the way, ends on a note that, although predictable, is sweet, heartwarming and meaningful. Despite Netflix taking a lot of inspiration from Disney, mainly Coco, it’s still a nice animated film the whole family can enjoy. It’s decent, but it’s nothing new.