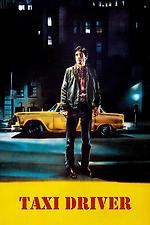 Taxi Driver is a 1976 American psychological thriller directed by Martin Scorsese and stars Robert De Niro, Jodie Foster, Cybill Shepherd and Harvey Keitel. The story follows a New York cabby who is driven to violence in an attempt to rescue a teenage prostitute.

When talking about the greatest movies of all time, Martin Scorsese's Taxi Driver is usually brought into the conversation. This plunge into the darkest corners of the human mind feels painfully relevant in today’s worn down, busted society. Scorsese’s direction keeps the audience uncomfortably close to Travis’ subjectivity, whether we’re roaming night time Manhattan or watching his nightmare unfold through various conflicting monologues, Robert De Niro's Travis Bickle manages to be as sad as he is frightening whilst also being weirdly intriguing to the audience from the get-go. From his general discomfort with others and his feeble attempts at communication, it's easy to recognise the root cause of Travis' inner distress as a terrible longing to be liked and for approval from others. This creates a character that genuinely intrigues you. You feel saddened for Travis as you watch him negatively navigate his life after multiple disastrous experiences and once he sets his sights on saving someone, the path he takes creates a rather daunting experience of good intentions, bad execution that ultimately effects his life.

It's fair to say that Martin Scorsese's rather daunting phycological thriller was one I was completely captivated by. Not many films have ever dramatized urban indifferences as powerfully as this. At first, Taxi Driver comes across as horrifyingly interesting, the way he acts and sees the world has a sort power over the audience, turning him into some sort of anti-hero upon the closing credits. Yet, it also quickly turns to a darker, more violent place as his actions and means by doing so shape the way he sees the world. This creates a very dark, yet somewhat powerful, production that takes the viewer deeper into the persona of insanity and alienation that never fully vilified its antagonist. That for me, and I'm sure many others, will leave them glued to the screen for its entirety, unsure whether to think of Travis as the villain or a somewhat anti-hero of this story.

It's very easy to relish in Scorsese's masterwork within Taxi Driver. Everything from the acting, direction and cinematography to the dialogue and general eerie vibe the film emits is magnificent. De Niro's intimidating, unstable and frightening performance was phenomenal, but is mere icing on the proverbial cake for the deeper, more rooted psychological effects one person can suffer from. Taxi Driver doesn't just work as an incredible film, but also works at being a brilliant psychoanalysis of a somewhat disturbed individual, and it's that what truly defines this film as the masterpiece it has become.
Martin Scorsese's Filmography Ranked